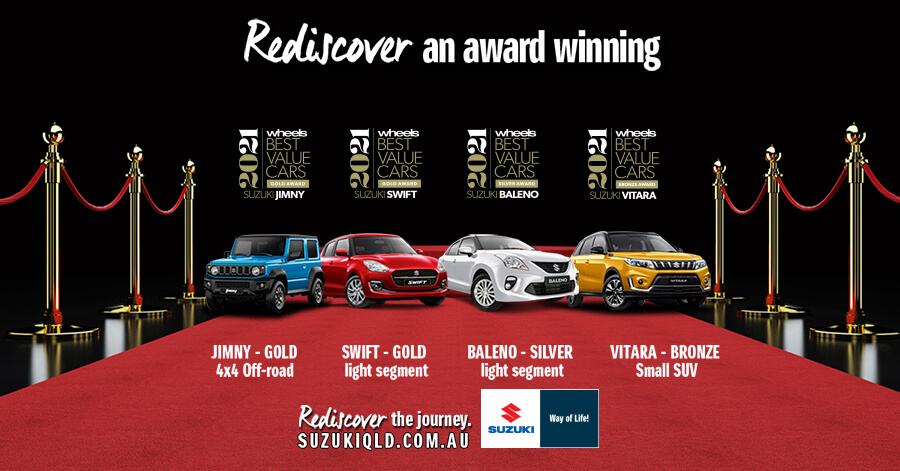 JIMNY VOTED ‘THE BEST’ AGAIN … ALONG WITH SWIFT

Suzuki’s off-road superhero, the unstoppable Jimny has picked up another major award being voted Australia’s Best Off-road 4X4 in 2021 by Which Car.

Which Car, which draws on the resources of Wheels, Motor, 4X4 Australia, Street Machine and Unique Cars magazines and their associated online sites, gave the Jimny its Gold Award in the category noting: “Despite its inexpensive sticker price the Jimny comes with proper off-road hardware. There’s a dual-range transfer case to make the most out of the diminutive four-cylinder, as well as live axles that ensure good wheel articulation.”

Which Car went on to say: “Suzuki has been a stalwart of compact off-roaders and the latest Jimny continues that theme.”

It described Jimny’s potential for retained retail value after five years of ownership as “exceptional”.

But it wasn’t only in the 4X4 category that the Suzuki brand starred.

As the world’s leading compact car specialist, Suzuki picked up another major category win in the Which Car awards with the Suzuki Swift GL Navi taking the Gold Award in the Light/City Cars category.

Which Car said: “The Swift GL maintains an attractive price point against many competitors that have surged in recent years. It’s also an in-demand car on the used-car market.”

And who do you think came second in this category?

Another outstanding performer in the category, the Suzuki Baleno.

But wait – there’s more. Turn a few more pages and you’ll find that the Suzuki Vitara, available as 2WD, AWD, and turbo models for the highways and dirtways, came in a very creditable third place in the ultra-hotly-contested Small SUV category.

Which Car? Suzuki cars of course!